When looking for information to motorize 9V switch points (4531), we realized that several proposals were available from some AFOL around the world. Some proposals were quite old (<2001) and some quite recent. In addition, some solutions with pneumatic cylinders were not exhaustively tested. To be honest, Philippe saw a solution based on the small pneumatic cylinder x189 more than a year ago, but the URL had disappeared from the web. Finally, this insignificant event pushed us to collect informations about existing methods and review them, describing at least one solution for each “motor” type. We hope this will benefit the community and some will even find it useful. This review was translated from its first french version with the significant help of Didier Enjary.

The 9V switch points, at least those you can buy today, have a locking position quite hard to overcome by hand. This lock is somewhat criticized by many of us. You may even unadvertently unclick the yellow lever (2866) when normally operating the switch point. Anyway, you have to solve this problem if you seriously consider motorizing your 9V switch points. There are two general trends in the “how-to” to tackle this problem : the modifyiers-trend and the conservers-trend. Let’s explain.

Softening the 9V switch point. The modifyiers propose to open the switch point, totally (Christian Haeuplik) or partially after undercover cutting (Dean Husby) to remove the two small locks which normally control the switch point mechanism. Be careful, if you remove them completely, then the switch point, when used without motorization, will change its position freely, most of the time with the vibrations when the train passes on... guess what will happen. The main advice is to control carefully the amount of plastic you remove when cutting-off those locks and try to leave a little bit of it to preserve some functionality. Everything is in a good self-control.

Strengthening the command. The conservers prefer using a command mechanism which delivers more power to overpass the lock without modifying switch point’s inside. Finally, this is the solution Philippe prefers because you can find now simple, efficient and powerful command mechanisms to put in your motorized unit. Besides a lack of natural poor self-control... for at least one of the authors ;-)

Lets analyse each solution and you will make your own decision out of it.

Solutions based on the new type 9V motor (71427). With the help of many friends, here are eleven solutions (two of which are very close). Probably a non exhaustive list.

General advantages : Fast operation for most solutions. Some solutions allow the use of non-modified switch points.

Solution based on small pneumatic cylinder (x189). Philippe met only one proposal described in a text by Ben Fleskes on Lugnet. From Ben’s description of the mechanism, he rebuilt a pneumatic unit available in a (Ldraw file). It hardly works on non modified switch points, maybe not with a brand new one having a strong lock system. we recommend to use it on modified switch points. Here is the assembly sheet. Be careful, the Ldraw file of the yellow lever 2866 is not in the official distribution. Here it is, 2866.dat. The ldraw files for the x189 pneumatic cylinder was proposed by Marc Klein since the publication of the first version (in French) of this review. Now these files are available (thanks to Marc Klein) x189a.dat, x189b.dat, x189c.dat, x189c01.dat, x189c02.dat. Copy these files into your Ldraw’s “Parts” directory and this will enable the complete Ldraw file of this unit to be correctly visualized.

A power unit based on the small pneumatic cylinder.

Drawbacks : This small pneumatic cylinder is quite difficult to find as a spare part. The lack of power will impose a modified switch point. No semaphore (waiting for a proposal...).

Solution based on the large pneumatic cylinder (2793). Philippe could not find any existing proposal but the one mentioned in the introduction and which disappeared from the web. Here is a Ldraw file of a pneumatic unit Philippe uses on his train layout. And here is the assembly sheet. 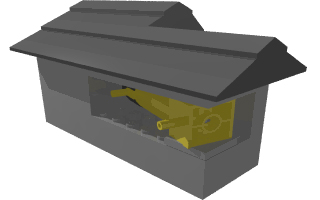 The 2793 large pneumatic cylinder in this power unit.

Drawbacks : Slow to operate. No semaphore, but waits for your proposals :-) .

The last minute advice. To motorize a switch point placed on a fast traffic switch point, use a 9V motor solution. Prefer solutions avoiding the internal modification of your switch points (you already knew our preference). Look at the solution proposed by Amaury Jacquot, an enhanced version of Chris Alano’s mechanism. Fast and reliable. The fastest being the 2838 motorization.To equip an industrial railway track, you can go for a solution with the large pneumatic cylinder 2793, especially if you plan to put many switch points close from each other. You will benefit from the proximity for pneumatic connections and you’ll get an overall relatively low budget. But don’t ask for speed of operation. The lowest cost is the small pneumatic cylinder (x189) solution. Placed in a small cabinet requiring few bricks, but you need to modify your switch point for this bargain.

Merry Christmas and happy train games to all of you,