During the 23rd and 24th of April of year 2005, we were few FreeLUG members to take part for the first time to this big Internation Model Exhibition in Paris, called the “Mondial de Maquette et du Modèle réduit”.

Our first visit at this show, where almost 35 000 visitors attended, had a major impact. Not only for us as we already reported in our minutes, but also for our host and friends from the French Train Model Association (FFMF) who received us on their booth.

The FFMF reported our visit in their own publication “Plaque Tournante” they offer to all their members. 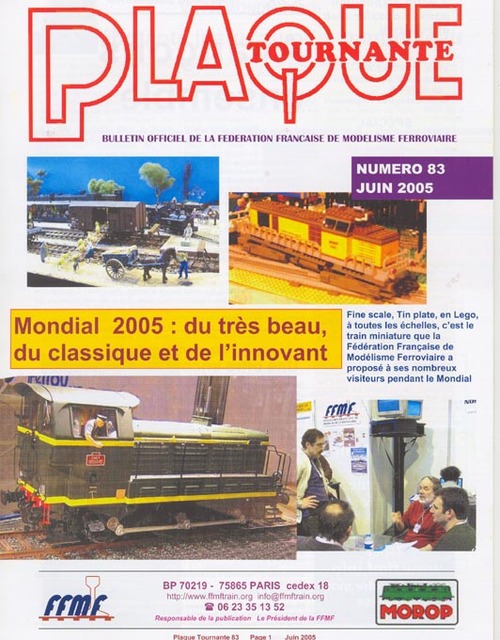 Since few months I’ve got their authorization to present few pages of their document where they kindly spoke about us.

As you could see, if you’re reading french, our participation has been a big success and I’m proud to announce today, that the FFMF already invited us for the next release that will take place from the 13th until the 17th of April.

The 2006 show will still take place à Paris, porte de Versailles, but only for 5 days instead of 10, last year. This is now easier for the organization and the clubs that doesn’t have often enough resources to attend more. So this year, we planned to attend for the whole show, five days long !

To prepare this exhibition who is oriented for mass public, a dedicated wiki web page espace Wiki has been set in order to register all people who would like to attend.

The slogan for this year is “BE SPECTACULARE !”, because this event is a must for all the associations that are taking a part and a good opportunity to get some feedback.

So, in order to share our passion with other people, I thaught to invite some other members of the French Train Model Association to join us in a contest :

If you’re a FreeLUG member and if you’d like also to attend, please register before the 31st of January, so we will be able to finalize the layout map. Notice, that you could attend according several ways :

Be part of the exhibitors team, for all show duration (5 days).

Make a part of or a full module, you could let to an exhibitor.

Make a part of the display or vehicule, you could let to an exhibitor, or that you’ll just bring wing you when visiting us.

Just visit us and take part to the presentation of our creation to the public.

Do not hesitate to contact us quickly, because mid April, this is almot the day after tomorrow. All registration will be at least totaly closed after our next general meeting.