Under the cover of an european week on the exploration of the Mars planet (March on Mars), 25 students from 15 european countries met together at the school of Polytechnics.

The meeting was given on the train platform for our 4 “teachers”. It can easily be noticed on the faces that it was not a usual time for some of them :-) 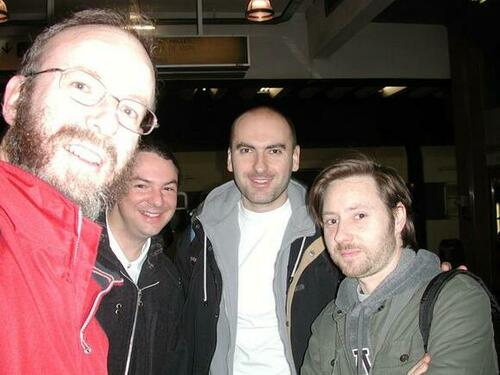 The backpacks full of MOCs based on RCXs and books on programming, JLB, Chris, Philo and Gaël entered a room full of 25 students (male and female) talking in english around a morning coffe.

The Mindstorm RIS 1.5 kits were lended by a Swiss university. Marc had started to build a standard base for all the group based on a RCX, 2 motors, one light sensor and a touch sensor. 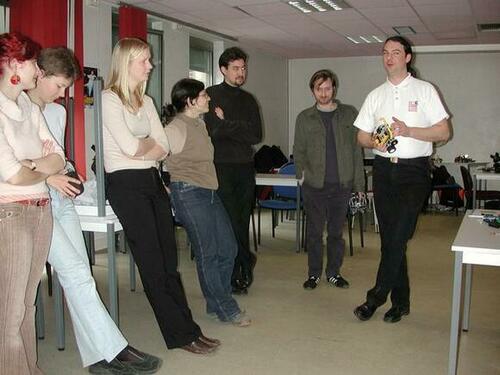 Philo and Chris started by installating BrickCC on the computers. Then, They showed some of their own creations. 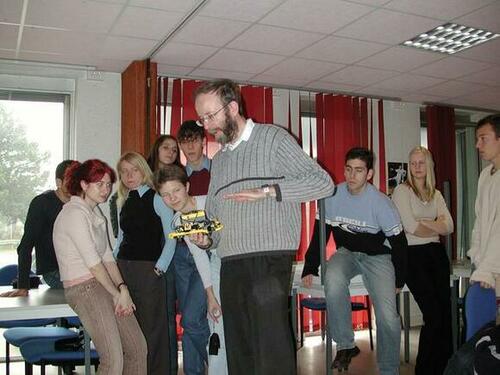 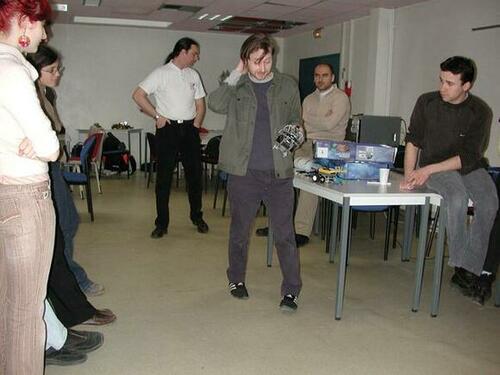 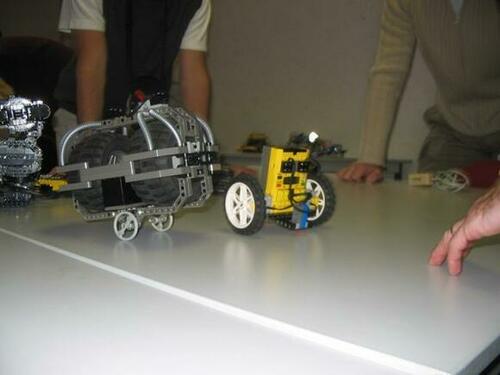 A very good atmosphere quickly set up and many questions were asked about the models presented.

From 10:30am, after the demos, we start the serious business. Four groups were formed. Each group had a Mindstorm 1.5 set, a computer with BrickCC and a list of the NQC basics instructions.

Marc helped a group who directly wanted to program in JAVA. 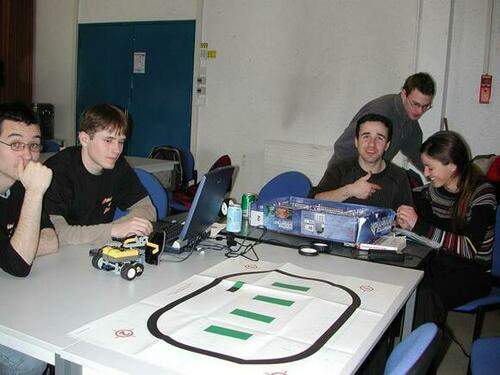 A very curious group concerning the sensors attracted the interest of Philo. 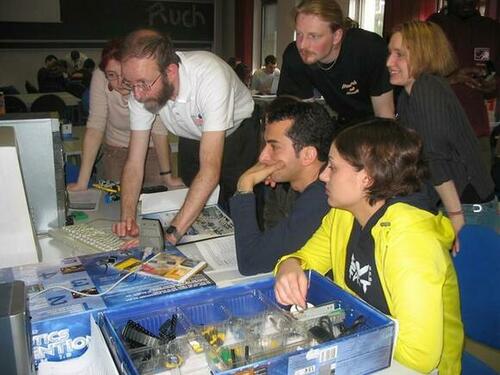 Chris, JLB and Gaël helped the two remaining group to set up by introducing the RCX brick and the NQC language. 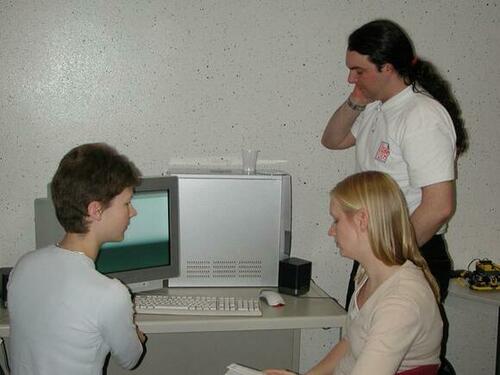 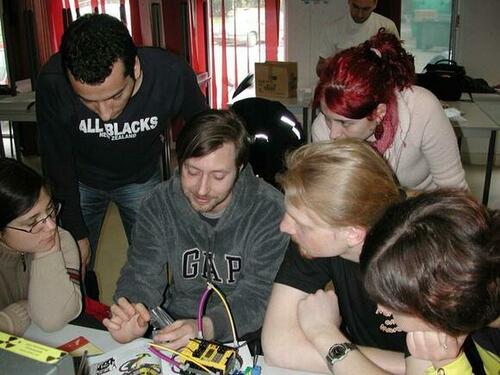 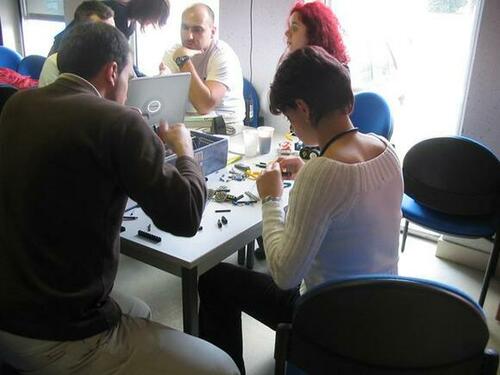 The first task asked was to make the robot move, then use the touch sensor and finally the light sensor.

After one hour, all the groups had a functional robot and each of them went on a personal project. The first one had decided to have a robot that could stay on the table (border sensing). The second one used the light sensor to have their robot reacting to a small torch light. The third one was a danser and musician. The forth stayed on the original idea, a martian rover (which can follow a black line and avoid obstacles).

On his corner of the table, a student who had strongly studied mecanics, built a small “robot” based on only 2 motors, one acting as a dynamo in order to avoid using batteries. He did explained us that in Slovaquia batteries were very expensive. 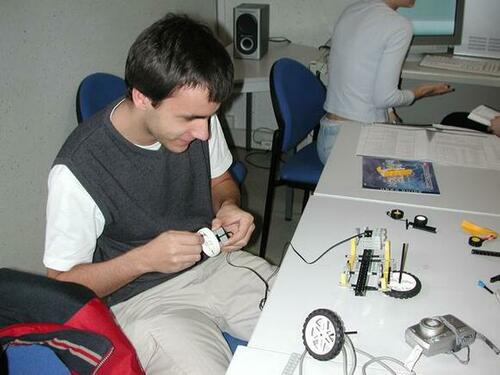 You can see the walking robot video in the link at the bottom of the page.

After a 1.30h break for lunch, far too long for some of the students who wanted to get back to the room earlier to continue to “play”, programming and building restarted. 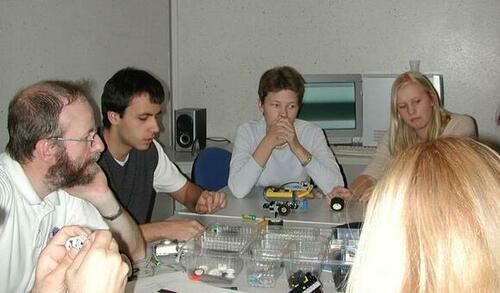 Except for some students who did enjoyed the heat of the room to take a nap ;-) 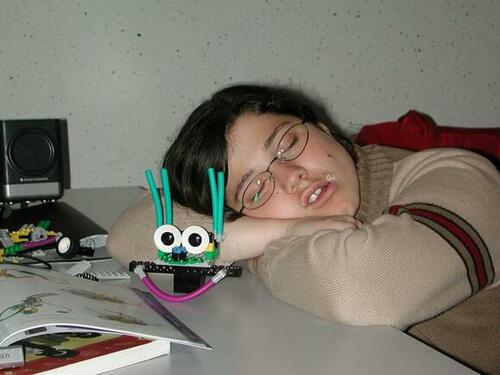 It seems that the week were hard ;-)

A group then decided to control their robot with a mobile phone, interesting idea, but so logical ;-) The mobile light up on a new incoming call, a light sensor detect the enlightement and the program then activates a motor which wave a flag. Videos are available in the links in the footer of the page.

The end of the day came too quickly, especially when you have fun. The students had a great day and numbers of them (boys and girls) will certainly continue this first robotic experiment with a Mindstorm set. FreeLUG did very well on that aspect ;-) 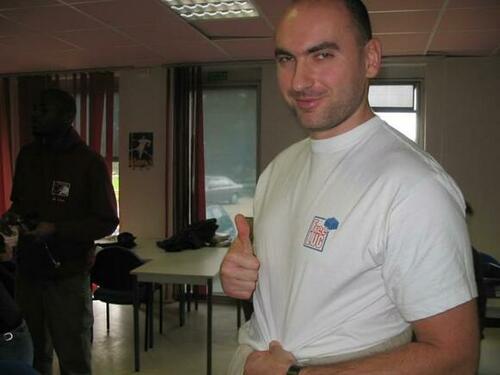 On our side, we had lots of fun, sometime surprised by the ideas developped. It was a very interesting day with an interested and interesting public all day long. This day was for us a reminder of our student years :-) We’d like to thanks the organising team for this event (Alex, Vince and all the others), and we hope to come back next year :-) 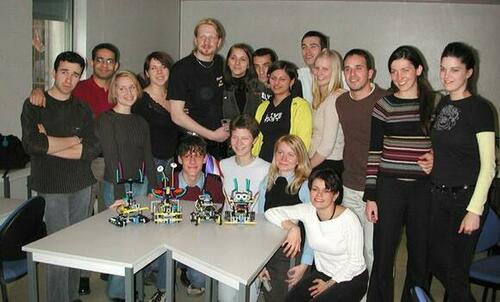