The third edition of the Summer Afol’s Day took place in Reims. Some feeback on this amazing event.

For the 3rd consecutive year, FreeLUG organized its Summer Afols Days. The event took place in Reims (North-East) of France, with AFOLs from France but also Netherlands and Belgium.

A little bit of history...

The Summer Afols Days (SAD) was born in 2003, 6 months after the official creation of FreeLUG and it was another “good” reason to meet each other’s. The first event was in Rennes (North West), then in Grenoble (South East) in 2004. Several goals pushed to organize these events. Firstly, meeting together, FreeLUG’s members are mainly split all over France and Belgium. The second reason is to be able to spend some time only between us (no public, only AFOLs) and show our MOCs, put together some collaborative projects, have a good drink and some good food, as before all, we are French ;) We also try to have the event change place every year so everyone can eventually join the year it’s not too far. Another good reason to change is to satisfy the partners, wives, kids who can discover another nice area of France and eventually take a week holidays. Every year the event becomes bigger, around 20 AFOLs in 2003, nearly 30 in 2004 and now around 40. It also grows in the size of the place we rent and the number of days. This year the first ones arrived on Friday evening and the last ones left late Sunday.

This year we had 2 major collaborative projects: GBC (that we have translated as GBB) and the brickciel and two competitions: the strongest bridge and a “Wacky Crazy race”.

The GBC consist of motorized modules that move LEGO balls. It was a great fun to see all the modules built all over the country joined together and starting to throw (literally) balls all over the room. After some modifications, fixes and changes, the 12 modules were all working together in a nice flow of balls. We saw some very great designs for these modules, from the one motor to the RCX-driver. You don’t need to be a great Technics addict. Nico built a castle with a nice water wheel and a shooting ball system, on the other side Philo or Jlb did some great pure Technic designs. 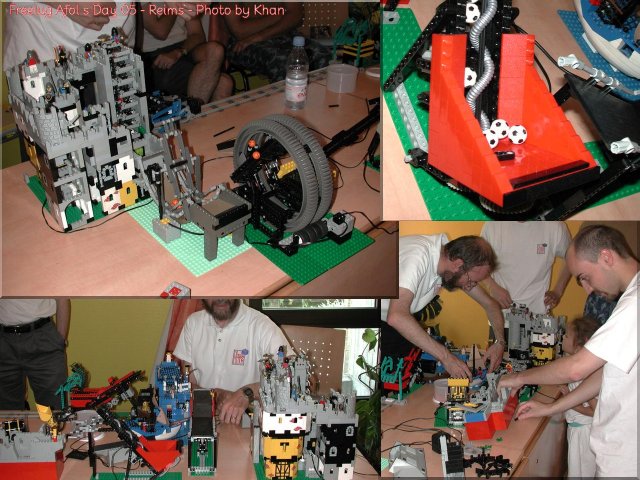 The brickciel (SkyBrick) is a stack of sized-defined modules 8 bricks high. Erik launched a “defi” for this year: reaching the ceiling of the room! Step by step (or modules after modules) the building grew. We then needed the help of Chimere (2 meters tall) to add the last ones. Even if each module needs to follow specifics rules to hold the weight of the modules above it, the design is completely free which gave some very nice, originals and interesting designs. LeGnome created a very high module (around 32 bricks high) and organized a game where we had to guess the number of minifigs hidden in it.

The strongest bridge competition took all our attention. Some were very light with a very few parts, others where very gracefull or technically advanced. The goal was to hold a minimum of 5kg. To simulate the weight we used a bucket that we filled with water. Most of the bridges did generate some cracks as the weight was increasing. But they all reached the 20kg! Just amazing! 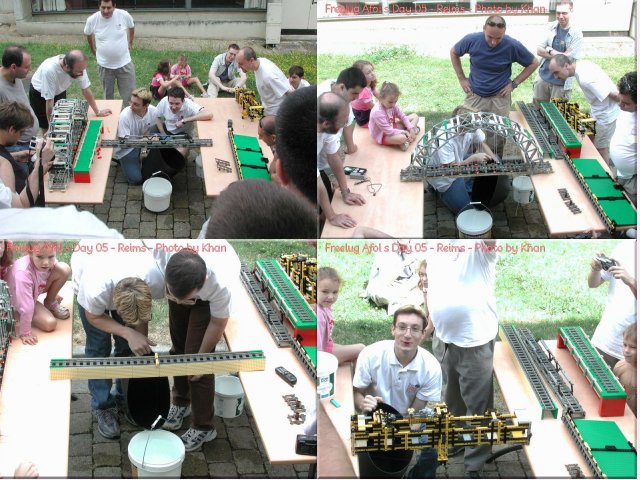 The “wacky race” is quite simple: build a vehicle with a minimum of 2 wheels and a driver. The craziest one always the best. The vehicule is then drop on a ramp and tries to go as far as possible.

Meeting together is always a good opportunity for train’s fans. A non-organized layout took place with some nice locomotives and wagons. 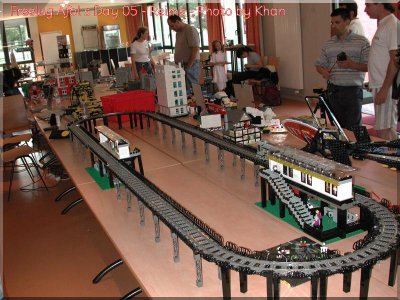 Also an interesting tramway like from Nico. Our friends from Netherlands came with superb buildings one representing ancient Greece and the other a town.

On the Star Wars layout, a race between pods was taking place. The pods were mounted on standard train motors, quite fun to adjust the speed not to have them hitting each other’s. 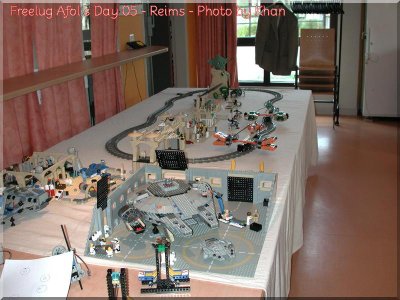 FreeLUG’s Summer AFOLs Days is an awaited event from our club. We were very pleased to welcome for the second year our Friends from the Netherlands who apparently enjoyed the weekend. We don’t know yet where it will be next year, but any AFOLs from EU or the other side of the ”pond” is welcome to join. We will post invitation on FreeLUG’s web site but also on Lugnet.